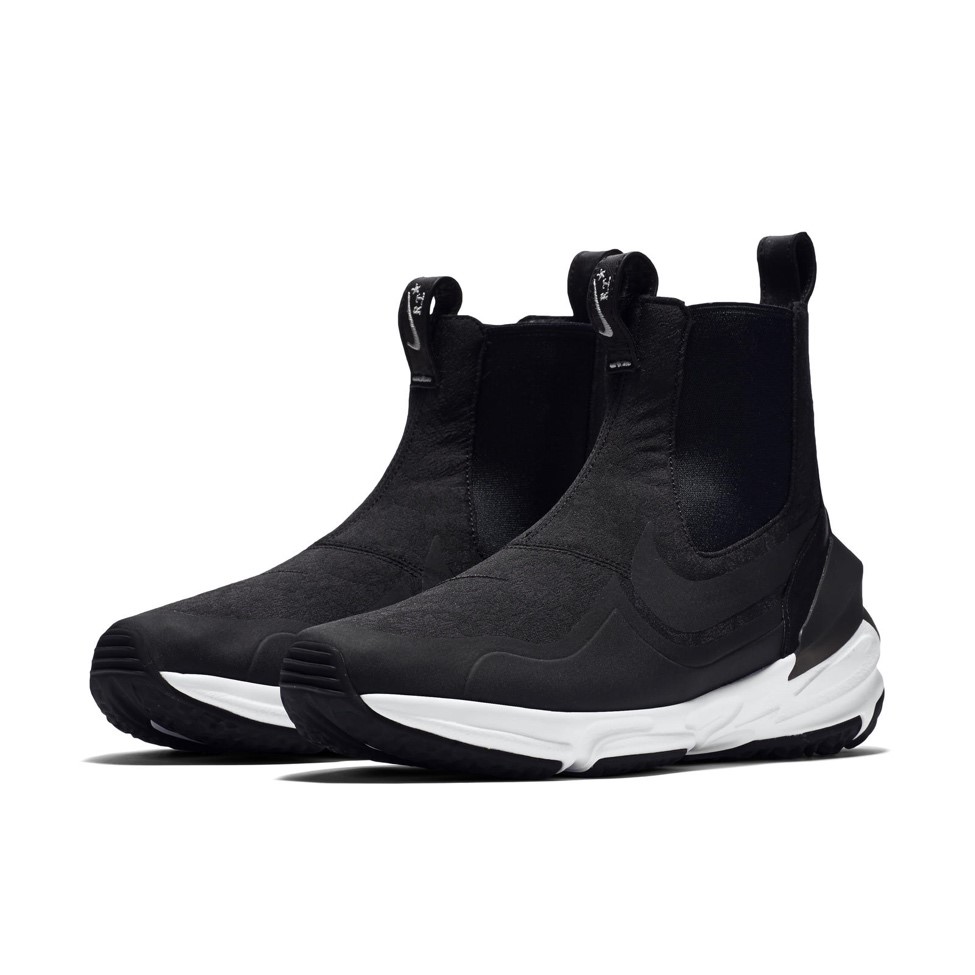 In 1990, the street style favorite the Nike Aqua Boot was born. A shoe specifically designed for water sports with a high arching silhouette. Over 25 years later, Riccardo Tisci, creative designer for Givenchy, decided the sole of the Aqua Boot was to be the base for his new collaboration with NikeLab. The foundation for the Air Zoom Legend established, the designers then followed with fusing the aesthetics of the iconic Nike design with all the style and elegance of a classic Chelsea boot.

The final product, available in two colorways, has first a more basketball inspired theme, including a black mesh upper and an eye popping rainbow heel design. The other colorway option has a more sophisticated look, featuring a grey floral pattern, embroidered on black for a tone on tone design, a woven jacquard upper and an all white midsole. The design of the RT x NikeLab Air Zoom Legend combines the iconic features of both the designers with the rubber heel and sole being on point with Nike designs and incorporating Tisci’s current obsession with Chelsea boots.

To finish the look and in true RT style, the shoe is finished with a leather lining, pull tabs and foot beds as well as a heel clip featuring the RT logo and Nike swoosh branding.

Since the Givenchy designer started collaborating with sports giant Nike, the Air Zoom Legend, marking the fourth time the designers have collaborated, has been the most creative and interesting design yet. A truly head turning shoe, fusing together modern design, performance enhancing features as well as a little elegance. Tisci revealed the inspiration for the design was very much him, injecting all of his Tisci style into the shoe. A strong shoe with an experimental design, the heel is always the talking point.

A shroud move from the collaborators, they chose to revive the old Aqua due to its close link to the nineties, a symbol of youth culture and street style. With many other designers reliving the iconic decade, bringing back the choker necklace, platform shoes and even scrunchies, the pair could not have picked a better time to launch their new product. Styles like the Aqua were adopted by both sports fanatics as well as the street style conscious, allowing for both style and performance to shine through. Darryl Matthews, Senior Designer for NikeLab said of the Air Zoom Legend “The Shoe juxtaposes Rio’s lively beach life with inspiration from Brasilian modernist architecture and the formality of a gentrified Chelsea boot. The NikeLab Air Zoom Legend x RT was made possible through Ricccardo’s unique ability to fuse athletic geometries with sneaker aesthetics.”

Although nothing is confirmed yet, Tisci has a longstanding affection with the sportswear giant and is apparently open to working on other projects. Here’s hoping we see some more products from RT early in the new year!